The Importance of Perseverance 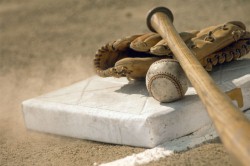 Shar Ray talks about an early lesson from his father that he was fortunate to receive, a lesson about commitment. And he explains just why this lesson was, and still is, important to him (and to you) today...

When I was young, I asked my father to sign me up for little league. Three games into the season I found that I hated the game of baseball. My 9-year-old self wanted nothing more than to quit. The game simply didn't excite me and there were plenty of other things I felt I could be doing with my time.

However, my father didn't allow me to quit. He said I had made a commitment to the team and it simply wouldn't be acceptable to leave my teammates in the middle of the season.

I can't even explain how angry I was at the time. It seemed to be cruel and unusual punishment for a father to make his child continue playing a game he clearly wasn't interested in. It certainly felt like little more than a punitive move on the part of my father.

But as the years have gone by I have started to see more clearly what by father had in mind when he forced me to finish out that seemingly interminable season. No matter how unhappy I was at the time, it taught me a valuable lesson about commitment: a person should never start something that they do not intend to finish.

This lesson has served me well throughout my life. I can't even say how many times things have fallen my way simply because I stuck with a difficult task when others decided to quit. It would also be impossible to list all the rewarding experience I have had the privilege of living through that only happened because I saw through to conclusion something that was challenging and that I may have been tempted to give up on.

The fact is, each and every person is faced with things they would rather not do. This happens every single day. In these situations, nothing would be easier than giving up. Despite my recognition of the value of commitment, I am as guilty as anyone else in this regard. What determines a person's character is how they respond to these challenging situations.

So how do you respond when faced with a situation where you rather just quit? Do you give in to these negative feelings and throw in the towel? Or do you persevere and continue trying to make the best of a bad situation?

Sticking with things is important because you never know where they will lead. Every time you give up on something it is one more door that will never be opened again. For example, by the end of my first little league season I had to admit I was kind of starting to enjoy the game of baseball.

I eventually developed a love for the game that carried me through high school. Some of the most rewarding experiences of my life took place on a baseball diamond. I came to love the smell of freshly clipped grass, the ping of a ball hitting an aluminum bat. I never would have had the chance to experience these pleasures if I had taken the easy road and quit when things got tough.

And it is these qualities of perseverance and commitment that I now bring to my practice of yoga, specifically Dahn Yoga...

Dahn Yoga is one of the largest yoga and tai chi companies in the world with its own unique style and brand of yoga. Dahn Yoga is rooted in the rich history of an ancient Asian mind-body practice, Sun Do, and in the wisdom of the Chun Bu Kyung.