"Unaccustomed to public speaking as I am..."

Yes, it's a corny line to deliver, but it's also amusing, it gets your public speech going, and it's a beginning! The thing is, fear of public speaking affects us all, it seems, at some point in our life. But this is a learned fear, and there is no reason that this fear cannot be challenged and overcome... 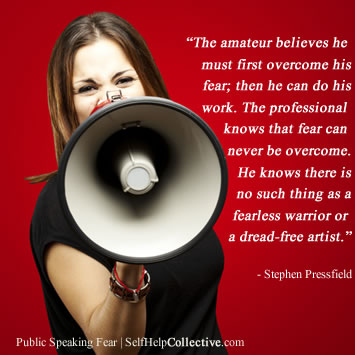 Yes, your public speaking phobia is unnecessary - you need not fear public speaking. You simply have to face this fear (as ever) and learn what you need to do become comfortable speaking in front of others. To help you do this:

What more could you want, eh? (Surely you don't want me to make a speech!)

Controlling Your Fear of Public Speaking

Unusually shy as a child, I don't even particularly like taking centre stage in a group of friends, let alone speak in front of people. So that means that...

is the type of thing that leaves me feeling anxious, weeks and months in advance, and I don't enjoy enjoy myself at the time, either!

Yes, it's fair to say that I have (or rather had) a public speaking fear.

I really noticed my fear of public speaking when I stood up to read a short story I'd written to a group of strangers (mostly) in my local library, one evening as part of Holmfirth Artweek in 2008. I made a mess of my introduction (unrehearsed), and soon after my throat became incredibly dry, and I started to shake the paper that I was reading from.

It was the dry throat thing that disturbed me most, and I had no idea what to do with it except to gulp on imaginary fluids in my mouth and to read on.


Yuck! I did not enjoy this experience and pretty much decided then and there to take a public speaking course (see details below). And that's when I discovered that 'dry throat' phenomena is quite a common symptom of public speaking phobia.

Funnily enough, I really enjoyed the presentation skills course - I was a bit of a star, don't you know! - and it gave me an appetite for performance. Yes, performance! I now want to do a stand-up comedy course - not because I'm a funny man or anything (heaven forbid!), but because this seems like the ultimate 'public speaking fear' challenge - I want to sing in a karaoke bar (this is something that you would NEVER have heard me say even a few years ago), and I want to even be in my own band!

Okay, overcoming fear of public speaking is not easy, but my own somewhat transformational experience does show that it is possible, if you take the necessary steps. I firmly believe that you (and I) can overcome this phobia, I really do...

NOTE: one solution I also tried - and it helped, for sure - is a self-hypnosis download from HypnosisDownloads.com. It's a short MP3 hypnosis script all about fear of commitment. Just sit down, listen, absorb... It's that simple! 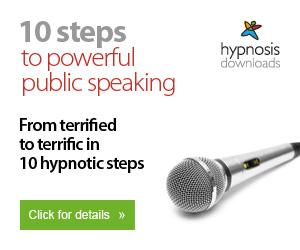 ...Which leads me to what Edward Hope says about public speaking fear.

These are some of the overcoming public speaking phobia techniques that Edward Hope suggests (in the video below), with my comments afterwards:

Edward's thoughts give us all hope (if you'll pardon the pun!)

So... unaccustomed to public speaking as I am (ahem!") I think it's time for you to listen to me sharing the wisdom of Edward Hope...


Edward Hope is editor of http://www.selfconfidentspeaking.com/

Reminder: listening to a self-hypnosis script can help you overcome this fear