Anger Management Movie – What We Can All Learn From It!... 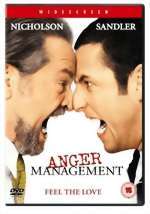 So have you seen Anger Management, then? It stars Adam Sandler as Dave Buznik - the passive and unassertive businessman whose love life is haunted by a childhood first kiss that went 'wrong' - and Jack Nicholson as Dr. Buddy Rydell - the anger management guru who runs the anger management class that Dave is forced to attend.

I never went to the cinema to watch Anger Management in 2003 - the trailer put me off, I guess, as well as the image of two angry men. But I guess this type of image (on the right) sells movies .

And I only ended up watching the film on the strength of the three amusing anger management YouTube videos I've included below. Of course, these clips are the best thing in the film - go figure! - and the film deals more with the issue of assertiveness (or lack of) than anger management, in my humble opinion but I'm still glad I rented the DVD (from lovefilm.com).

As I've already said, Anger Management is more about assertiveness than anger management and the set piece anger management classes mostly featured hot-heads (with obvious anger issues) rather than the passive aggressive types who smoulder, and nod in agreement right up to the time that they explode in rage... (Oh dear, and ouch!)

My verdict on the film: the anger management movie is (yet another) slight Hollywood film that delivered less than I expected it would but it was fun nevertheless. And I guess that's good enough. And Adam Sandler's passive-aggressive and unassertive business man reminded me of me, alas. Which I guess is a good thing.


Let's watch some movie clips shall we, courtesy of YouTube...

Anger management - what the Anger Management Movie has to say...

"I feel pretty...". Adam Sandler's Dave Buznik character certainly does not feel pretty. Not only is he late for work for an overbearing boss who clearly takes Dave for granted (whilst taking all the credit for Dave's work), his anger management instructor (played by Jack Nicholson) has made him stop his car on the busy bridge to sing a song. He's late, he's singing a daft song with a possibly psychotic man, and fellow drivers are abusing him...

(This clip from anger management movie lasts just over 1 minute, with one swear-word!)

In terms of anger management, I think this is an exercise in making Dave angry rather than the opposite. Which may have been the point. It's early in the film and Dave is still 'taking it' from anyone who wants to give it to him.

In terms of a movie, though, I think it's kinda funny scene and kinda cute even.


"My name is Galaxia.. that's my German name." This was the last clip I watched. It tests just how far Dave will be pushed before getting angry when Dr. Rydell introduces a not-so-feminine 'lady boy' into the back seat of the car with Dave.

(This clip from Anger Management lasts over 2 minutes and contains actor Woody Harrelson dressed as a woman - watch out!)

Unfortunately the learning point from the movie is not shown in this clip - the point where Dr Rydell tells Dave that his anger, this time, was a good anger, was an anger that said, "I will not tolerate this any more - stop!"

And that's the point with Dave, he never gets angry, ever!

And anger management is not about never getting angry, it's about expressing your anger appropriately as and when it occurs.

Here endeth the sermon. To be honest, I have anger management issues - those of not expressing anger - and I most certainly am not an expert with anger. I wish. But I believe the solution lies in a) understanding the problem and b) taking relevant action (like reprogramming yourself using anger-management self-hypnosis from HypnosisDownloads.com) - for a deep dose of soothing that lasts!

Dr. Buddy Rydell: "Dave, there are two kinds of angry people - explosive and implosive. Explosive is the type of individual you see screaming at the cashier for not taking his coupon. Implosive is the cashier who remains quiet day after day and then finally shoots everyone in the store. You're the cashier."

Hey, which guy are you?

Or how about this movie quote:

Dr. Buddy Rydell: "Remember, Lou, temper's the one thing you can't get rid of by losing it"

Anger management Movie - what I say, in conclusion...

If Anger Management the movie succeeded in doing one thing, for me anyway, it's telling me that some forms of anger are okay. This 'okay anger' should be expressed in a healthy way and not be bottled up (as anger always has a habit of sneaking out, when you least expect or desire it).

Whereas anger as uncontrollable rage is still a no-no and a class in anger management is probably required, if you want to have any kind of positive relationships with other people anyway.

Maybe you knew all that!

Maybe you have a healthy attitude to anger already. Well, good for you. Why not share your wisdom (and good fortune) with the rest of us not so blessed, eh!...